The Sangha is conducting a circulating library with over large number of members. The library has nearly 9000 books and 100 weekly and monthly magazines in Kannada, English, Marathi and Hindi. Six daily newspapers in Kannada, Marathi and English are being purchased for the reading room. In the year 1987, the library was named as ‘Smt. Lingamma Booba Kuckian Memorial Public Library’ in memory of the mother of our former Chairman, Shri M.B.Kuckian who had donated Rs. One Lakh to Sangha’s Building Fund. The library has also been recognized as a C grade public library by the Govt. of Maharashtra and has been receiving financial assistance every year. Previously, the library had also received grant from Navi Mumbai Municipal Corporation for four years. 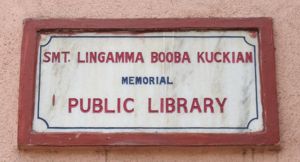